“It is a special honor to be a warship’s first CO,” said Capt. John Stafford, commander of Submarine Squadron 4. “When the history of the submarine Idaho is written, Cmdr. Meyers will be remembered as the crew’s very first commanding officer, and leader who prepared these exceptional Sailors who made Idaho a fighting ship of the line.”

The future Virginia-class fast attack submarine USS Idaho is under construction at General Dynamics Corp.’s Electric Boat shipyard in Groton. Its crew is known as a pre-commissioning unit (PCU) until the submarine is commissioned as an operational ship.

“Serving as commanding officer of the future USS Idaho’s first crew is the highlight of my Navy career,” said Meyers, a native of Cumberland, Maryland. “I am tremendously proud of the Sailors on this team, the drive they've shown to get themselves and their submarine ready for operation, and the incredible relationships they've built not only across the Navy, but in the community with the public as well.”

During Meyers’ tenure, he led members of the crew on visits to the submarine’s namesake state on multiple occasions, working with the civilian commissioning committee to build strong bonds in the community there.

“I am grateful and deeply honored for all the support I received over the past few years from this outstanding crew, the squadron staff, the patriotic shipbuilders at Electric Boat, people of the great state of Idaho and, perhaps most of all, my wonderful family,” Meyers said. “I look forward to seeing all that the future-USS Idaho accomplishes under the skillful leadership of Cmdr. Leslie, and in defense of the United States of America.”

The future USS Idaho is scheduled to be the 26th Virginia-class submarine to join the fleet and eighth in the Block IV of the class. The Block IV submarines are notable for incorporating smaller-scale design changes that increase the number of deployments a sub can complete for each period of regular shipyard maintenance.

SSN 799 will be the fifth U.S. Navy ship to be named for the Gem State. The last ship to carry the name was a New Mexico-class battleship that served during World War II.

“Cmdr. Meyers’ inspiring leadership has prepared the crew of the future USS Idaho to be successful for many years to come. It’s a true honor for me to take command now and serve with this tremendous crew as we work with our Electric Boat teammates to get the Gem of the Fleet ready for sea,” said Leslie, a native of Highland, California, who attended high school in nearby Redlands. “I could not have reached this point without the sage advice of my Navy mentors over the years and the loving support of my family, and to them, I express my deepest gratitude. To the Sailors of Idaho, I’m truly excited to join you as we carry on the warfighting legacy of the men and women that have served throughout the history of the land we now call Idaho.”

The future USS Idaho will be homeported in Groton and operate under Submarine Squadron (SUBRON) 4. During his period of command, Meyers enabled up to 60 percent of the PCU Idaho Sailors, across all paygrades, to temporarily join operational submarine crews in Georgia, Virginia and Connecticut to support a range of underway missions vital to national security, providing Idaho Sailors with valuable experience while enhancing the capabilities of other crews.

“It has been a true pleasure to work with Cmdr. Meyers over the last two and a half years to establish and grow this pre-commissioning unit into a crew that not only lent support to the shipbuilders constructing the Idaho, but to the operational submarines along the waterfront,” said Stafford. “Cmdr. Leslie is an extraordinary talent who inherits a great crew. I’m confident he’s the right leader to take this team to sea. Cmdr. Leslie, as you prepare to bring the Idaho into a world of growing geopolitical uncertainty, my squadron staff and I stand ready to support you.” 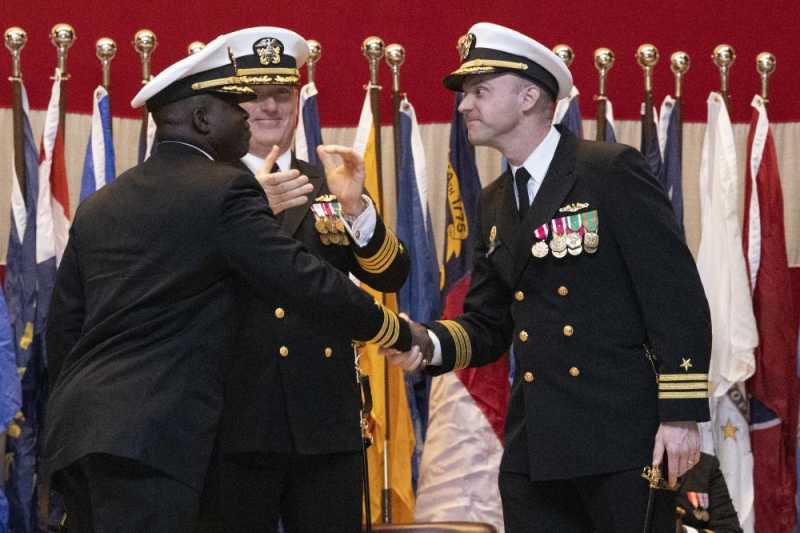