MCCALL, Idaho — In an effort to build a bond between the Gem State and U.S. Navy Sailors assigned to the USS Idaho, the pre-commissioned unit is traveling around Idaho through Feb. 2, making a stop at the McCall Winter Carnival Saturday morning.

According to the USS Idaho Commissioning Committee, this is the fourth time over the past year that future sailors set to take the battleship to sea have visited Idaho. The fifth USS Idaho has been under construction for the last four years. The pre-commissioned unit said they expect the boat to be ready for sea within the year.

The USS Idaho Commissioning Committee said the submarine is likely to be commissioned into the US Navy fleet in the summer of 2023. The new boat is a Virginia-class, nuclear-powered attack submarine, currently under construction in Groton, Connecticut.

Once completed, it will be the first Navy ship to be named after Idaho in more than 100 years. On Saturday, KTVB visited the USS Idaho crew's meet and greet on 2nd Ave. in McCall, between the Chevron station and the Manchester Ice Center.

During the event Saturday, a 1:16 scale model of the USS Idaho submarine was on the street, as well as future crews hoping to learn about the new vessel's namesake.

USS Idaho Commander Nicholas Meyers told KTVB the pre-commissioned unit is "proud" of what is ahead for the nuclear attack warship, capable of intelligence gathering, surveillance, sea control, land attack, mine detection and special operations.

"We’re so proud everyday over in southeast Connecticut to accept custody of our nuclear submarine," Meyers said. "And test and operate those systems and get ready to take that vessel to sea to answer the nations call."

The event in McCall was just one of many planned for the six crews by the USS Idaho Commissioning Committee. The unit also visited Nampa High School, an Idaho Steelheads game, a joint session of the Idaho Legislature and Cascade Post 60 American Legion reception before hitting the carnival Saturday.

The last USS Idaho served from 1919 to 1946. The battleship earned the nickname 'the big spud,' and crews said they are proud to carry on that legacy.

"There’s no ocean in Idaho but there are a lot of sailors and former veteran sailors in Idaho," USS Idaho Master Chief Dean Marvin said. "And a rich history to the state for our US military and our US Navy in the submarine force. That is unique, I guess. Idaho has been really awesome to experience and learn."

Crews at the McCall event said the fifth USS Idaho is a nuclear-powered submarine that can run 30 years on a single tank of gas. They also said the boat will be so silent, it is already earning the nickname 'the silent spud.'

"It is a core mission of our committee to familiarize the sailors with our state and to establish a bond between Idaho's citizens and the sailors who will take the USS Idaho to sea as a crucial part of our nation's military strategy," USS Idaho Commissioning Committee officials said. 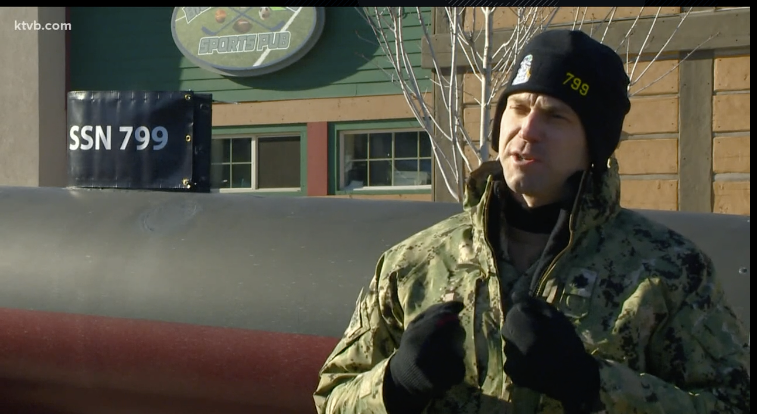